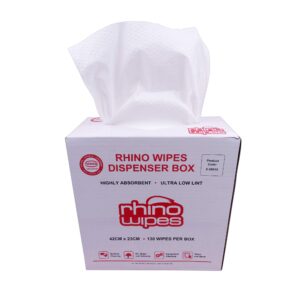 For more info call us or email us, or contact us through the enquiry button below 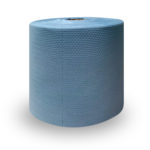 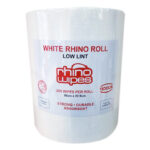 Because mechanics go through loads of rags a day, they know the issues with inconsistencies in size, quality and absorbency. And so, many have moved to disposable wipes. Why? Because they offer better size consistency, quality and absorbency. Also, they’re not as bulky. And definitely cleaner and more hygienic! Hence, we’ve made the AUTOMOTIVE RHINO WIPES BOX, a portable dispenser box of wipes.

In addition, these heavy duty mechanics wipes don’t leave lint residue after use, unlike rags. Not only are they ultra low lint, but they’re also super absorbent. In fact, they’re probably more absorbent than rags of oils, solvents and fluids found in garages.

So, try these automotive towels. And, use them to soak up the next antifreeze leak. Or use one of these rag replacement wipes to clean up grease, oil and brake fluid. Because they’re solvent resistant, they’re ideal for working with solvents and chemicals.

These strong automotive wipes are made from a polypropylene cellulose mix. So, they won’t fall apart when they get soaked. Your mechanics can use them for maintenance and surface preparation. Or for clean-up once the job is done.

You get 130 rhino wipes in each box, and there are 10 boxes per carton. You can keep a box in each bay for ease of access. And you don’t have to transport and store bulky bags of rags anymore.